Check out this passage from the Bible (which has been rewritten by English scholars several times throughout history), and just try to track the way the English language evolved over the last thousand years.

Modern English (New International Version, 1978) – In those days Caesar Augustus issued a decree that a census should be taken of the entire Roman world.

Early Modern English (King James Bible, 1604) – And it came to passe in those dayes, that there went out a decree from Cesar Augustus, that all the world should be taxed.

Middle English (John Wycliffe translation, 1380) – And it was don in tho daies, a maundement wente out fro the emperor August, thatal the world schulde be discryued.

As you can see, language doesn’t just slightly change. It evolves; it mutates. It becomes a barely recognizable version of itself, with just a thousand years turning it into a completely different language!

And the craziest part? No one is forcibly pushing these changes. This all occurs naturally.

So how exactly does this happen? Here are a few quick reasons:

The simplest answer here is “other people”. Other peoples and cultures interacting with a language can have a huge effect on the evolution of that language. We take words and phrases from their languages, and they adopt our language and change it in their own ways.

Think of the phrase, “The app on my Android is busted.” We all know what that means today, but would someone from even just twenty years ago have any idea what you mean? What about two hundred years?

New inventions and technologies create a need for new words and phrases. And as older technologies fall into obscurity, so does the vocabulary tied with them. After all, when was the last time you needed to hail a hansom instead of a Grab or Uber?

We drop rules and create new rules to fit our needs.

The ultimate goal of language is to communicate. The evolution we see in languages over time is a product of our communication needs. As culture evolves, so does context; as context evolves, so do the requirements of speech and effective communication.

Check out The Expert Editor’s infographic below. They highlight 15 old grammar rules that are okay to break – plus three you definitely shouldn’t – to help you communicate better:

Editor’s Note: I use Grammarly to keep a check on my writing. It’s a useful tool to have, but you still need to know the rules before you can break them. 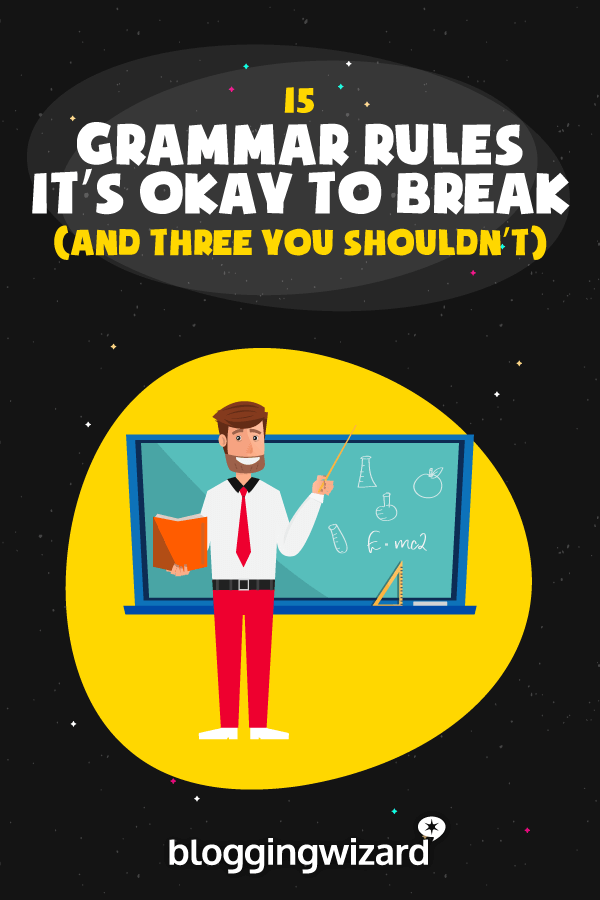 Isabel Cabrera is the Communications Manager at The Expert Editor, Australia's leading editing and proofreading company. She is also a freelance writer and occasional grammar rebel.