Automation. Love it or hate it?

As a solopreneur or small business owner you need all the help you can get.

And that involves embracing automation.

You know that social media can prove to be a big time-suck if you allow it. But if you use the right tools to automate some tasks, then you can maintain your personal interaction.

One of the tools that I use is Missinglettr. And it’s proving to be an effective way to maximize the engagement for my blog posts.

Later on there is an exclusive interview with Benjamin Dell, the Founder of Missinglettr, but let’s start with a quick look at the product.

Missinglettr is a relatively new tool that sets up a drip social marketing campaign for your blog posts.

Instead of just sharing your latest blog post once, Missinglettr will create a campaign to run for the whole year, dripping out content one message at a time.

Missinglettr uses a technology called ‘Natural Language Processing’ to read through your blog post and detect the important highlights. Then it creates a unique marketing schedule of your blog posts to run over the next twelve months.

Getting Started with Missinglettr

Using Missinglettr can be broken down into three simple steps.

Missinglettr will now be checking your blog and as soon as it detects a new blog post has been published then it will create a campaign. The campaign consists of excerpts from the blog post including quotes and images.

Once the campaign is created, you will receive an email notification asking you to review it.

(1) All campaigns need to be reviewed and approved before they are activated:

(2) The types of suggested tweets will vary based on your article, but they’ll include some of the following:

(3) In this example, the campaign started on April 4, so some tweets have already been sent:

(4) But the remaining tweets can still be edited, and here you can change the text, image and hashtags:

(5) Finally, after you have reviewed all the tweets you can approve the whole campaign:

How much does Missinglettr cost?

Missinglettr has a selection of pricing plans for individuals and teams.

If you don’t publish blog posts too frequently and only care about promoting your site on one social network, then the free plan might be for you:

The Solo plan is perfect for small businesses and bloggers. Features include:

To get access to the full range of features Missinglettr has to offer you’ll need the Pro plan.

With both plans you get 2 months free when purchased annually.

One of the impressive things with Minimum Ideas – aside from the awesome Missinglettr product – is the open dialogue with their Founder and CEO Benjamin Dell.

I recently took up his offer of a 15-min Skype chat to review his social automation tool and discuss future plans.

And he also kindly agreed to answer a few questions for this blog post!

Where did the idea for Missinglettr come from?

I also run a digital agency, and we were finding that the vast majority of our clients were asking us to include a blog section on the site we would build for them, and yet very rarely they would know how to maximize the effectiveness and exposure of the blog.

We could see them writing content, but that’s often where the story would end. Some would tweet about the article once, one or two would follow-up a week later, but almost none of them would follow a systematic drip marketing campaign spread out over a meaningful time.

Our conclusion was that it wasn’t due to the complexity of the job at hand, but rather the perceived effort, the discipline and, of course, the habit and routine needed to see the strategy through.

The idea behind Missinglettr was born!

When did Missinglettr first launch?

We soft launched at a social media event in September 2015; however we didn’t properly emerge until January / February 2016.

What has been the biggest struggle to date?

We’re intentionally seeking out unscalable activities that will help us better understand our customers. Given that we’re a relatively new startup, it’s incredibly important to iterate and evolve the product based on quantifiable demand.

As such, I’m personally doing everything I can to speak with as many customers as possible. This is unscalable and is maxing out my time to a degree that is quite scary, but it’s an absolute necessity at the moment.

So whilst this is technically our biggest struggle at the moment, it is a chosen struggle and one we enjoy doing!

The biggest struggle so far is actually a self-imposed one.

What’s your favorite feature so far?

My favorite feature so far is still the core of the product.

Reviewing the drip marketing campaign that it has created for me and being able to visualize how it will be spread out over the next 12 months is fun, invigorating and drives me to write more content.

What’s on the roadmap for Missinglettr?

In the very short term, we’ll be adding weekly snapshot emails reporting on the number of clicks you have received from the tweets and social content we’ve sent out for you.

We’ll also be extending to other social networks and opening up the platform so that paid users can choose their personal drip marketing schedules (such as a 3-year one, or a short, but a more intense 14-day blast).

We have quite ambitious plans in the long run though… watch this space!

I hope you’ve enjoyed learning a little more about the product in this Missinglettr review.

Here’s a quick recap on the main benefits of using Missinglettr:

It’s a great product that enables you to publicize each blog post regularly via social media over the course of a year. 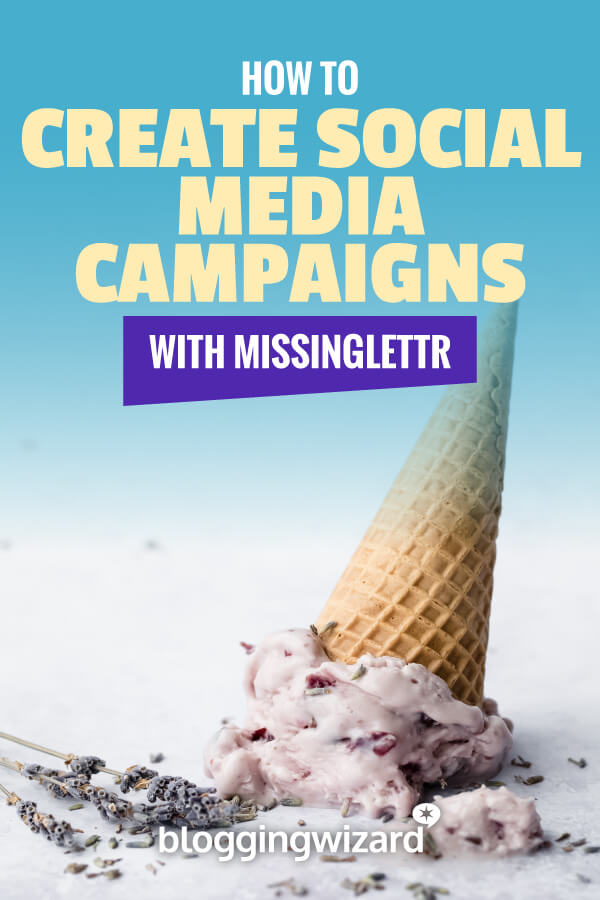 David Hartshorne is Blogging Wizard's resident technical copywriter with years of content marketing experience. David is also a freelance writer working with personal brands, marketing teams, and digital agencies to create detailed, actionable content that resonates with their audience. When he's not writing about digital marketing technology, you'll find him chilling with a thriller or roaring on the Villa.