Welcome to our collection of Facebook video statistics and trends.

The way users interact with Facebook is changing. At its inception, Facebook was primarily about networking. It was the place to go to talk to family and friends and share your thoughts. These days, Facebook is all about video.

Facebook users now spend a substantial portion of their time on the platform consuming video content on their News Feeds or on Facebook Watch. In fact, this is predicted to soon become the primary way people use the platform.

In this post, we’ll be looking the latest Facebook video statistics. These stats will provide useful, data-driven insights for brands, marketers, and publishers and help to guide your Facebook video marketing strategy this year.

These are our most interesting statistics about Facebook video:

First, let’s take a look at some general Facebook video statistics that provide an overview of how large the Facebook video audience is and how often users watch and publish video content.

That’s probably a conservative estimate, given that the 8 billion figure comes from 2015. The platform’s user base has expanded significantly in the 6 years since then, so there’s a good chance it’s significantly higher by now.

Interestingly, those 8 billion views came from just 500 million people who watch videos on the platform, which means that the average user watches 16 videos per day.

That might seem unusually high, but when you consider the fact that it’s common to scroll past over a dozen autoplay videos in just a minute of scrolling through your feed, it seems much more plausible.

2. Over 100 million hours of video are watched on Facebook every day

That’s the equivalent of over 6 billion minutes, 4.1 million days, or 11,000 years’ worth of content every single day.

It’s a staggering figure, but it still pales in comparison to rival platform YouTube, on which over 1 billion hours of video are watched every day. This shows Facebook still has a long way to go if it wants to dethrone the video-sharing platform.

3. Video now accounts for almost 50% of all time spent on Facebook

In a recent Facebook earnings call for investors (Q2 2021), Mark Zuckerberg noted the growing importance of video and how it’s becoming the primary way people use the Facebook platform.

According to Zuckerberg, almost half of the time on Facebook is now spent watching videos. He also notes that much of this success has been driven by Facebook’s personalized algorithms, which push certain videos to viewers based on their interests and behaviors.

This is up from 12% last year and shows that video is becoming more popular. This goes some way towards confirming Zuckerberg’s prediction that video will become an increasingly important part of the way people use the platform.

However, this stat also shows that Facebook certainly isn’t primarily a video platform just yet, as the vast majority of posts are still photos (38.6%) and links (38.8%).

5. 46% of social media users use Facebook to watch videos

While 46% is a lot, it also shows how Facebook is still primarily a networking platform. Many more users use the platform to view photos and share content than to watch videos.

According to a recent analysis by Facebook, Binge-watching is one of the main drivers behind the rise of mobile video consumption. Binge-watching is a relatively new user behavior that’s particularly prevalent amongst millennials.

Online video viewing has become second nature to users in this age range, so much so that 61% now often find themselves watching multiple videos in a row. 58% of them said they did so without consciously thinking about it.

The study looked at how viewers watch videos on different platforms and found that video viewing happens across a variety of channels. YouTube dominates (84%), ad-supported TV comes second (81%), and Facebook and Instagram come in third place (68%).

Considering including Facebook in your upcoming video marketing campaigns? The following Facebook statistics will tell you some need-to-know facts about using Facebook videos for marketing purposes.

8. Facebook is the second most popular platform for video marketing

Facebook is an extremely popular platform for all types of marketing, including video. According to data from Wyzowl, 70% of video marketers use the platform as a distribution channel. Only YouTube was more popular (used by 89% of marketers).

Comparatively, only 79% of marketers felt the same about YouTube and only 67% about Instagram. The vast majority of marketers also felt confident that Facebook videos could be used to drive engagement (86%) and views (87%).

If we look at the distribution of different types of posts by profile size, it’s clear that bigger brands post more videos than smaller accounts.

If you want to create awesome video content for Facebook, it’s important to know what it is that really grabs the viewer’s attention. The Facebook statistics below focus on what makes Facebook videos engaging for viewers.

Facebook IQ carried out a lab eye-tracking experiment in which they monitored subjects’ eye movements as they scrolled through their feed. In doing so, they found that the average person’s gaze typically hovered over video content 5x as long as static image content.

The same study showed that the gaze hovered 40% longer on 360° videos than regular videos. This is an interesting discovery, however, only a small proportion of video content on the platform is in this format. 360° videos are much harder to film than regular videos and could be the reason for the lack of adoption, despite them proving to be more engaging.

It’s long been thought that Facebook prefers to promote videos uploaded directly to the platform, rather than those shared through other competitor platforms like YouTube, and this stat seems to prove it.

14. Vertical videos outperform horizontal videos when it comes to engagement

For accounts with up to 5,000 followers, vertical videos generate an average engagement rate of 1.77% compared to 1.43% for landscape videos and just 0.8% for square videos. For large profiles with over 100,000 followers, vertical videos generate a 0.4% average engagement rate compared to 0.23% for landscape and 0.2% for square.

15. The average CTR of video posts is around 8%

Clickthrough rates for Facebook videos are fairly high in comparison to some other platforms. On average the rate is 7.97% across profile sizes, but that rises to a whopping 29.66% for smaller profiles with less than 5,000 followers.

8% is a good benchmark to aim for and should help you to estimate roughly how much traffic you can drive through video content on Facebook as long as you have an idea of your estimated reach.

17. Live videos that last over an hour have an average engagement rate of 0.46%

The longer live videos last, the more engagement they generate. Videos that last over an hour generate average engagement rates of around 0.46%, whereas those that are 10-20 minutes in length generate an engagement rate of just 0.26%. This could be due to the fact that it gives more people time to tune into the live stream.

Also, live streams are great for driving engagement like commenting and encouraging viewers to stay and chat with the hosts and other Facebook users in the comments.

This seems to be a trend across social platforms and goes some way to explain the success of TikTok over the last couple of years. Consumers enjoy short and engaging video content, especially when it comes to Facebook videos. Videos shorter than 30 seconds are becoming the norm across social media platforms.

And the good news is that most social media schedulers now have the ability to make scheduling short-form video easy.

Only 24% could be understood without sound. This is a problem, as video ads in Facebook’s mobile news feed automatically play without sound. You can make your videos understandable without sound by using visual signals like captions.

85% to be exact. People often watch videos on Facebook whilst commuting or in quiet environments, and many people rely on the caption function to get the gist of what’s going on. Therefore, if you want your videos to be engaging, don’t rely too heavily on audio. Aim to create videos that can easily be consumed with or without sound.

Facebook is ever-evolving and if you’re thinking about getting into Facebook video production, it’s a good idea to stay ahead of the trends. Here are some Facebook statistics about current video trends on the platform.

Smartphone users are by far the most popular device for Facebook video viewing, with mobile users 1.5x more likely to watch a video than desktop users. The upshot of this is that it’s super important to make sure you’re creating your videos with screen size in mind. Videos on Facebook should be optimized for mobile and viewable on a small screen.

If you didn’t know, Facebook Watch is a separate tab on Facebook dedicated to videos. It offers a way for Facebook users that want to use the platform more as a traditional video streaming platform than a social network. Despite there being many other options for this online, including TikTok, IGTV, and YouTube, people still seem keen to consume video content via Facebook.

According to Zuckerberg, the feature is now growing faster than other types of video or content in the Facebook News Feed.

The live video function is a relatively new addition to Facebook, but it’s one of the most popular functions for creators on the platform. Live videos make up around one-fifth (18.9%) of all videos on the Facebook platform. The other 81.1% are pre-recorded videos.

Although that might not seem like a lot, it’s actually a huge increase of 55% compared to 2020 and shows the demand for live video is growing.

The channel LADbible focuses on viral social media content such as cute pet videos and funny shorts. The channel is the most-watched Facebook publisher with around 1.6 billion video views in March 2019. UNILAD, another channel managed by the same company came a close second with 1.5 billion views.

The craft channel 5-minute Crafts is surprisingly popular on Facebook, despite some of the questionable life hacks that the videos demonstrate. In 2019, the channel amassed around over 1.4 billion views. The channel is so popular that many YouTube creators have even repurposed their content for their own videos.

So there you have it — 25 facts and statistics relating to Facebook video. Facebook video can be a great way to market products, build your brand, and engage with your community. Hopefully, these facts will help you make more well-informed decisions about your future marketing campaigns.

If you want to learn more about other social media platforms, check out some of our other statistics roundups like 38 Latest Twitter Statistics: What Is The State Of Twitter? and 33 Latest Facebook Statistics And Facts You Need To Know. 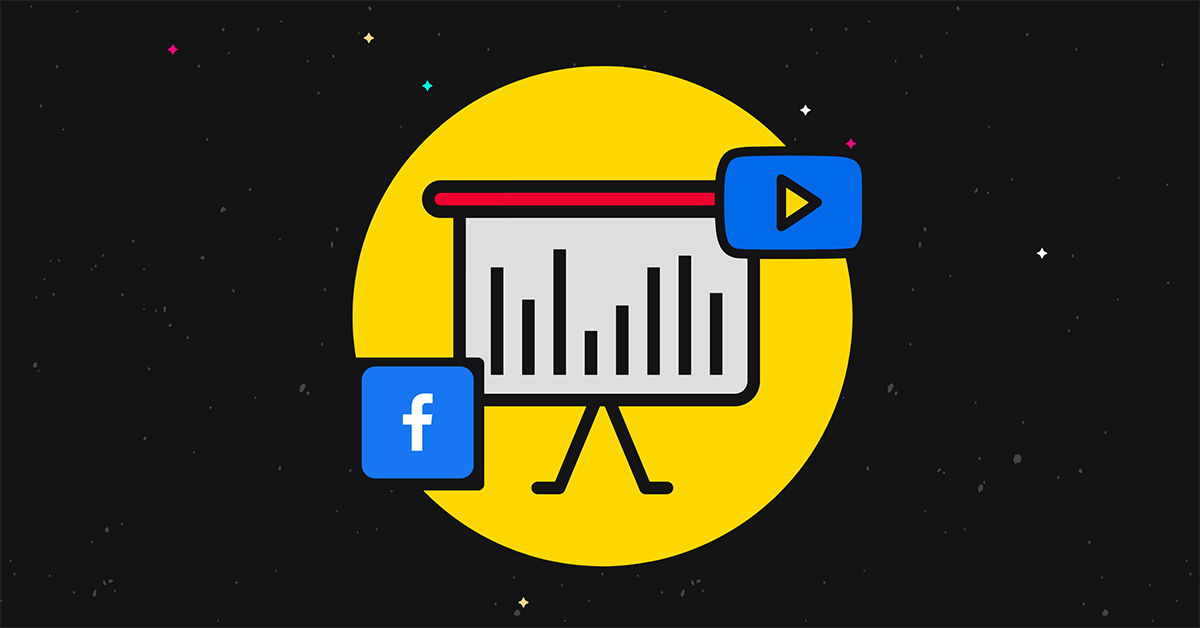 Aside from managing editorial here at Blogging Wizard, Nicola runs Your Creative Aura where she teaches people how to write music. Nicola has the rare ability to take inspiration from the most mundane objects and turn it into catchy, and memorable lyrics. And, she is rather fond of penguins.